Human beings, no matter how small weak, or dependent, possess inherent dignity and intrinsic worth by virtue of their humanity.

Thus the intentional harm or destruction of a human being for the supposed benefit of another human being is wrong.

This bedrock principle of traditional medical ethics was infamously violated throughout the 20th century.  Witness the gruesome “research” conducted on Jews and prisoners-of-war by the Nazis at Auschwitz and Dachau, the syphilis experiments performed on uninformed African Americans at the Tuskegee Institute in Alabama, and the intentional exposure of unwitting American servicemen to radiation during the 1940’s.  As Prof. James Burtchaell observed, the history of these experiments “shows well that when scientists and therapists set out to exploit one group to benefit another, it is invariably the disadvantaged who suffer for the powerful.”

During the last decade, the same kind of reckless disregard for the intrinsic dignity of human list has characterized the practice of conducting experimentation on pre-born children.  This experimentation takes two different but closely related forms:

Of all human beings, pre-born human life is most vulnerable to abuse and exploitation.  While VHSL welcomes legitimate medical advances to alleviate suffering and cure disease, those advances must never result from the intentional death and destruction of unborn human beings.

As Do No Harm: The Coalition of Americans for Research Ethics (www.stemcellresearch.org) concluded in its founding statement, On Human Embryos and Stem Cell Research,

“If anything is to be gained from the cruel atrocities committed against human beings in the last century and a half, it is the lesson that the utilitarian devaluation of one group of human beings for the alleged benefit of others is a price we simply cannot afford to pay.”

The foundation for this baseline principle of medical ethics comes from Hippocratic Oath. 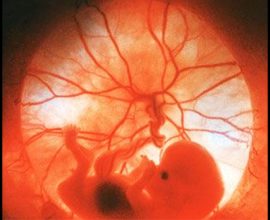 Life in the Womb