What is the Stealth Right-to-Abortion Amendment?

The Equal Rights Amendment is a constitutional amendment that Congress proposed in 1972, before the Supreme Court legalized abortion in Roe v. Wade (Jan. 1973). The ERA had a 7-year ratification deadline that expired 42 years ago.

The ERA was never ratified by the required number of states before the deadline for ratification had passed. 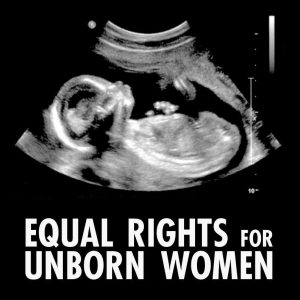 Pro-Abortion forces are trying to sneak the ERA – the Stealth Right-to-Abortion Amendment — into the US Constitution.  They have a multi-prong attack to do just that.  If this unprecedented scheme were to succeed, virtually all pro-life legislation nationwide might be permanently wiped out. It is really a stealth “right to abortion” amendment!

First, they are trying to get the House and Senate to retroactively removing the deadlines for ratification.

Second, they are suing the archivist of the United States to get the Amendment considered as past.  Attorney General Mark Herring is representing Virginia as one of the lead plaintiffs to get a court to agree to this scheme to ignore the ratification deadline.

Use the VHSL Legislative Action Center to urge Senators Warner and Kaine to vote against the resolution to retroactively remove the ratification deadline.

Sign the Petition to Attorney General Mark Herring urging him to drop the lawsuit to force the Archivist to say the Amendment has been ratified.

Background on the ERA

For several years there has been an effort to have the Virginia General Assembly ratify the ERA even though it was already past the deadline.  After Illinois “ratified” the ERA, there was a major push to by pro-abortion politicians to make this happen in Virginia to make it the “38t” state necessary for ratification.

We managed to defeat the ERA in 2019, but after pro-abortion politicians took over the General Assembly in the 2019 elections, they rammed through the approval of the ERA decades after the federal deadline without ever saying it would remove all limits on abortion.

When the Archivist of the United States said it was too late and therefore the ERA was not appropriately approved, our Attorney General Mark Herring promptly sued to overturn that decision.

On March 5th, the initial court ruling was handed down that fortunately ruled against the pro-abortion side.  But they have already indicated they will appeal & expect the Biden Administration to flip the Justice Departments position and that the Congress will retroactively repeal the deadline with a simple majority.

“While I do not believe that the arbitrary deadline Congress imposed on the Equal Rights Amendment is binding in any way, I welcome any support from both the Biden Administration and Congress in ensuring that this amendment is recognized as part of the Constitution once and for all.”

We know that their goal is to use the ERA to strike down pro-life laws around the country… pro-abortion activists have openly said so over and over again.

Case in point?   The National Organization for Women has stated that “an ERA — properly interpreted — could negate the hundreds of laws that have been passed restricting access to abortion care…”

Sadly, that is tragically true because, once adopted, history makes clear that Judges will use the ERA to do just that.  We only have to look at the state of New Mexico which has an ERA in their state constitution that is virtually identical to the Federal ERA.

In 1998, the New Mexico Supreme Court unanimously struck down a law restricting public funding of elective abortions, entirely on the basis of the state ERA, in a lawsuit brought by affiliates of Planned Parenthood and NARAL…and you can find many more examples on our VSHL website.

What is the argument saying this Amendment has not been ratified?

There are several key reasons why the ERA, the Stealth Right-to-Abortion Amendment, is not valid.

Even well-known ERA and Abortion Rights Supporter, Justice Ruth Bader Ginsburg, in remarks right after Virginia claimed to have ratified the Amendment, stated that the ERA approval process needed to be started again from scratch.

What are Pro-Abortion Forces Doing to Claim the Amendment was Ratified?

After Virginia attempted to ratify the Amendment 40 years past the expiration date, pro-abortion forces started several actions to attempt to have the Amendment declared as a valid part of the Constitution.

The Democrat-controlled Congress just took up the measure to do exactly that.  House Joint Resolution 17, that claims to retroactively remove the deadline, and thereby (according to proponents) to magically “air drop” the ERA instantly into the U.S. Constitution.

Last week on Wednesday, March 17th, 2021. the House voted on this resolution and it passed with a small majority on party lines, 222-204, the pro-abortion Democrats in the majority.

U.S. District Judge Rudolph Contreras (an appointee of President Barack Obama) today ruled that the ratification period for the Equal Rights Amendment, set in the ERA Resolution approved by Congress 49 years ago, was valid, and that the actions of the legislatures of Nevada (2017), Illinois (2018), and Virginia (2020) had no legal effect.

Pro-Abortion Attorney General Mark Herring has indicated he is going to appeal this decision.

Next up is the Vote in the US Senate on this resolution and a decision by Attorney General Mark Herring on whether to appeal.

Additional Background on the
ERA from the NRLC

Click on the links below for additional information on the ERA, what it will do, the status of the effort to add it to the Constitution and how it will be used to eliminate virtually every pro-life law in the country.

Letter to the House of Representatives before vote on HR 17

Quotes from Pro-Abortion Organizations on the ERA

Petition to Attorney General Mark Herring to drop the lawsuit regarding the ERA.

Virginia’s current pro-abortion Attorney General has committed the taxpayers of Virginia to a lawsuit to try and force the Supreme Court to recognize the vote on the ERA in our General Assembly last year and demand ratification of the pro-abortion ERA, the stealth “right to abortion” amendment, to the U.S. Constitution.  Just earlier this month a U.S. District Court ruling has rejected this demand since the time limit set by Congress has already passed! So, why are the taxpayers of Virginia are being dragged into Attorney General Herring’s pro-abortion agenda.

The decisive battle over the 1972 ERA will be in the Senate, where the “deadline ratification” measure can only be defeated — and must be defeated — by Republican senators employing the filibuster, voting against cloture as many times as necessary.  That fight is already underway and could be formally joined on the Senate floor as early as the week of March 22, although it could also be at a much later time of Majority Leader Schumer’s choosing.

Use the VSHL Legislative Action Center to urge Senators Warner and Kaine to oppose retroactively removing the deadline for ratification.