Governor Northam thought it was a good idea to sign the dreadful bill that overturned the protective Women’s Right to Know laws and Ultrasound law on Good Friday.

Here is the text of the press release VSHL sent out today.

“Today, as the deadline to sign into law bills that were passed by the 2020 General Assembly drew to a close, Gov. Ralph Northam kept a $3 million dollar campaign promise to Planned Parenthood. The dreadful bill that overturned the protective Women’s Right to Know laws and Ultrasound law was signed on Good Friday, only adding to the sadness of the situation for many Virginians.

The new law removes every reasonable protective requirement about information that must be made available to women before they have an abortion and allows non physicians to perform abortions.  The new law no longer requires an abortionist to perform an ultrasound before an abortion and give the mother a chance to see it, nor does it require the abortionist to provide mothers with a booklet from the department of health that describes the stages of fetal development, types of abortion or the risks of different types of abortion. The original law also required that women be given information about their legal rights if they were being coerced in any way to have an abortion.

“Now the only information women will receive is what the abortionist is willing to tell her. Abortionists who are making money from the same women for every abortion performed are not likely to share the dangers of abortion or tell women that her child has a beating heart and brain waves,” said Olivia Gans Turner, President of VSHL.

VSHL will continue to work to restore these protective measures in the General Assembly as soon as possible.

“The current leadership of the General Assembly has made it very clear that they intend to strip out every rational and protective pro-life law in Virginia and to expand abortion promoters’ plans for taxpayer funded abortions and unrestricted abortion up to birth and beyond, as Gov. Northam himself acknowledged last year,” said Gans Turner.”

Over the coming days feel free to use the link below to let the Governor know what you think of him signing this awful bill and to add insult to injury by doing it on Good Friday when many pro-lifers are remembering Good Friday. 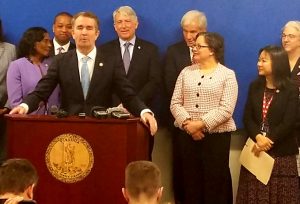 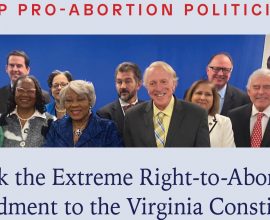