The Right-to-Abortion Amendment to the Virginia Constitution is a very dangerous threat to unborn babies. If enacted, the Amendment would eliminate all restrictions on abortion all the way up until the moment of birth. VSHL is aggressively opposing passage of this amendment but it is only with a large groundswell of opposition that we can defeat the Amendment.

This Action Center gives you the tools to help us in this fight to oppose the Amendment. Use the links below to help us fight against the Right-to-Abortion Amendment:

What happens if the Right-to-Abortion Amendment is adopted and why we need to make sure this Amendment is never added to the Virginia Constitution.

The Amendment will overturn these existing pro-life laws that protect the unborn:

The Amendment will prevent passage or reinstatement of the following pro-life laws and prevent any other new pro-life laws or regulations:

What is the process for amending the Virginia Constitution?

• A resolution supporting the Constitutional Amendment must pass both the State Senate and the House of Delegates during the same legislative session.
• A general election for the House of Delegates must be held in between. (2021)
• The exact same resolution must pass the State Senate and the House of Delegates during the next session after the election
• The resolution is voted on as a ballot referendum. If a majority of those voting favor the amendment, the amendment will be added to the Virginia Constitution. The vote by the public is scheduled by the General Assembly as soon as 90 days after final passage.
• The next two sessions in 2021 and 2022 are set to fit this timetable perfectly. So, we must lay the groundwork now if we are going to be able to defeat this Amendment.

What is the official name of the Right-to-Abortion Amendment?

Answer: Personal Reproductive Liberty. GA 2020 Bill Number and Text of the Amendment: SJ2 Constitutional Amendment: Personal Reproductive Liberty. Amends the Constitution of Virginia by adding a section establishing the individual right to personal reproductive autonomy. The amendment prohibits the denial or infringement upon this right unless justified by a compelling interest of the Commonwealth and achieved by the least restrictive means.

Why do you call it the Right-to-Abortion Amendment?

Answer: “Reproductive Liberty” is legal code for the Right-to-Abortion. The courts could certainly interpret this amendment as allowing an unfettered, unregulated right-to-abortion for any reason and at any time in pregnancy.

A CNN story talking about an Amendment to the Vermont Constitution with the exact same language as the proposed Virginia Amendment describes the amendment with the following: “…to amend the state constitution to protect personal reproductive liberty and guarantee the right to an abortion.”

Who is the lead Sponsor of this Amendment?

Answer: During the 2020 General Assembly session lead patron was the pro-abortion Senate Majority Leader, Sen. Dick Saslaw (D-35th). In 2019, Sen. Jennifer Boysko was the patron. We don’t know who will carry the bill in the 2021 session.

How can be the amendment be defeated? 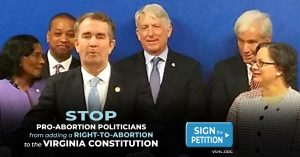 Color Flyer about the Right-to-Abortion Amendment 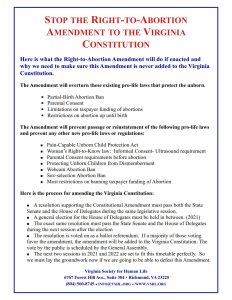 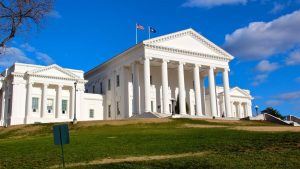